How to use your audience data with a purpose: the Edinburgh Festival Fringe

Whether it’s strengthening your relationship with your audiences to make them returning visitors or reaching out to other new audiences with similar interests, knowing the people who come to your venue or event can open a lot of doors for your organisation. We’ve already touched on how you can find this information; we’ve also created the Analytics Series, but here we want to show you how this data can be used with a purpose, to support your goals.

We’ve had the privilege to have Olly Davies, Head of Marketing and Development at the Edinburgh Festival Fringe, as a guest at one of our Fourth Wall sessions last August. Olly talked about his own experience with using data and told us how the festival adjusted their aims and marketing strategy to create a successful membership scheme for their audiences.

Background of the Fringe

The festival has been around for more than 50 years, and has grown bigger and bigger over time. For years, their messaging focused on this growth talking about the fact that it was the largest arts festival in the world, and their marketing spend followed this message. They spent 80% of their marketing budget to secure new visitor acquisition, with impressive results. The festival now sells more tickets than any other major global event (aside from the Olympics) for over 4,000 shows. In 2019, that represented over 31,000 artists and more than 150 countries, all gathered in the city of Edinburgh.

But is bigger always better? The scale of the festival received much criticism from residents’ with negative media coverage pointing the finger at the impact of such large numbers flooding into the city at one point of the year.

So the challenge for the festival became how to reduce the impact while continuing to increase ticket sales?

The journey of engagement

To answer this question, the festival want back to their data to better understand the progression of the audience relationship with the festival.

They were able to work out that the audience journey looked like this:

They knew 1 to 4 were steps they were good at, but because the Fringe were so focused on selling tickets, they had neglected loyalty. They looked at their data and noticed return on investment was much higher for returning donors than for someone who buys a ticket once or twice. It wasn’t about getting bums on seats anymore but increasing their audiences’ loyalty.

On the back of this, they created the Fringe’s journey of engagement: as the value goes up, the number of people goes down, without impacting on income and level of engagement. 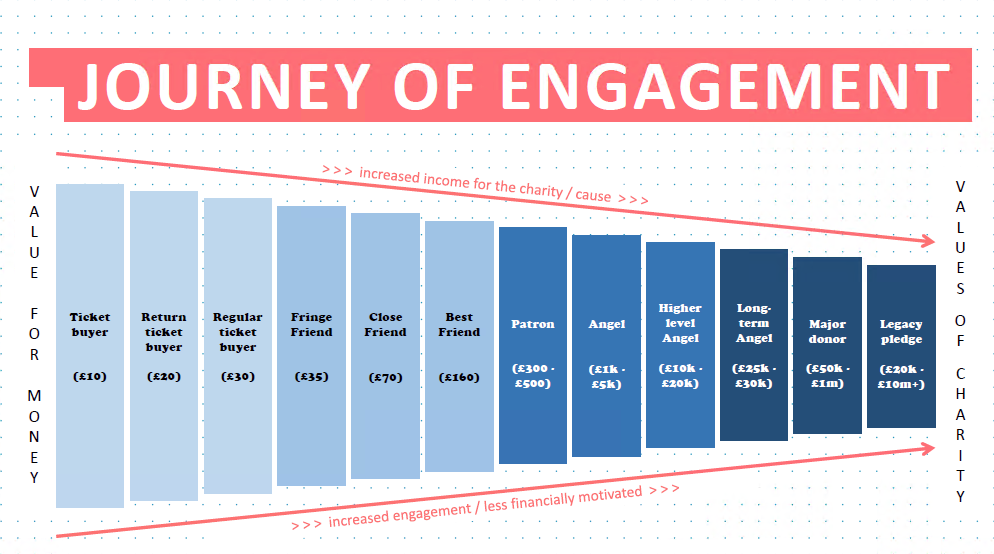 The Fringe's journey of engagement from Olly Davies' presentation.

What audience insights did they have?

Thanks to their ticketing system, Google Analytics, social media analytics and audience surveys, they knew that:

Taking these insights into consideration, they reframed their message and their approach. They stopped talking about The Fringe being the largest festival in the world anymore but instead became the festival that welcomes everyone. Whether you are local or foreign and regardless of who you are, you are the person that makes the Fringe unique.

Instead of focusing on new visitor acquisition, they needed to turn their lens towards deepening engagement. They looked at the key parts of their journey of engagement and directed their attention on behaviours they wanted their audience to have. This is what they did:

Olly and his marketing team knew that people who favorited shows were 5 times more likely to buy tickets later on in the journey and that tickets were mostly purchased via the festival app. So early on, months before the festival, they encouraged people to download the app, bookmark shows they were interested in and opt in for update emails. On the app, audiences were sent regular reminders when tickets for a specific show were running low. It was then easy to track the conversion rate on Google Analytics.

How did they get their audience to buy a membership?

Showing their audience the impact the festival has on the community was at the core of their strategy. When you’re a member, it’s not only about tickets but also about the value your money brings to the charity and the activities it is involved in. For each amount, a short explanation is given of what it can buy. For example, a monthly £10 membership is enough to buy a Fringe day-out for someone from a disadvantaged area of Edinburgh. Starting small is the best way to build a path to bigger commitments in the long-term.

Their biggest challenge was to convince members to renew their membership at the end of the year. They only had one month to do so after the end of the festival and they knew there was a considerable drop-off in renewal for one-off credit card buyers. The retention rate for people who signed up with direct debit was much higher. The way they did it was not to ask their members for money but to link it back to the impact their contribution had made in the past year. They sent an email to their members reporting about BSL, autism backpacks and how the Fringe’s artists are getting direct financial support from the charity. One of the emails included a video featuring disabled artists who performed at the Fringe, to highlight how accessibility is important but also how the Fringe is for everyone and anybody can perform at it. The email ended with a simple survey link asking for their feedback. It was the perfect opportunity for them to collect more information about these members, what shows they went to, what they liked and what they didn’t like. This information would help them to target them better when asking them to renew their membership.